Fullscreen
Light Switch
0%
Game loaded, click here to play the game!
Use the mouse to click and drag the suit to Freddy 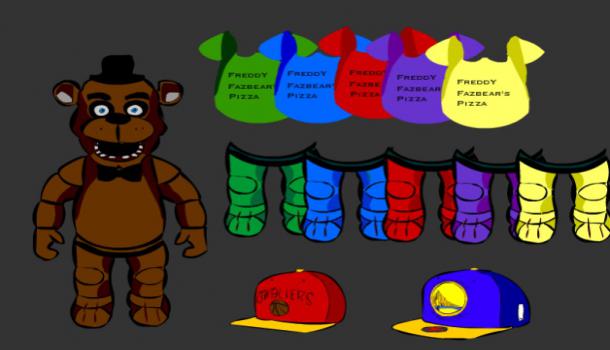 Any big fans of Freddy out there? Let’s meet this cute bear in Freddy Dress Up and grab a chance to become the best stylist ever! Help Freddy get dressed now!
Freddy Dress Up is a cool fan-made game giving you a chance to be Freddy’s stylist. In the game, there are some of the cool outfits, along with two nice hats for your selection. Freddy is very hesitant now since he doesn’t know which outfit will suit him most. Will you help him? All you have to do is to simply pick the outfit that you want him to wear, then drag them to him. There are five outfits with five different colors, including blue, red, yellow, green and purple. Freddy wearing these outfits will become good-looking bear working at Freddy Fazbear’s pizzeria. That sounds so cool, right? So hurry up and check this game out now! Hope you have loads of fun!

Are you excited for checking out FNaF World game made by Scott Cawthon? We are so close to the official release date of this hilarious RPG game, and most…

Five Nights at Freddy’s World is a…

Most of the fans of horror Five…

Everything We Know About…

Maybe you and we have spent a…